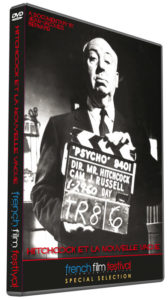 A documentary by Jean-Jacques Bernard | 2012

Presented by Jean-Jacques Bernard at the University of Richmond & Virginia Commonwealth University 20th French Film Festival’s Special Symposium on French Film: Arts, Science and Technology at Work for Humanity in 2012. French New Wave directors Claude Chabrol, Jacques Rivette, Eric Rohmer, Jean-Luc Godard and François Truffaut became filmmakers after having been enthusiastic Alfred Hitchcock fans. Their approach to the “British master of Hollywood” was able to redefine the notion of “author (auteur)” in cinema. How did it nourish their personal growth in filmmaking during the 1950s?
Hitchcock and the New Wave goes to the sources themselves. Chabrol, Rivette, and Rohmer agreed to participate in Jean-Jacques Bernard’s quest for answers to this historic relationship between Hitchcock and these pillars of the Cahiers du cinéma and the French New Wave. Bernard offers us an invaluable documentary with insights, recollections and comments by Chabrol, Rivette and Rohmer as well as by Luc Moullet and Charles Bitsch, not to mention rare excerpts from hours of sound recordings between François Truffaut and Hitchcock himself.